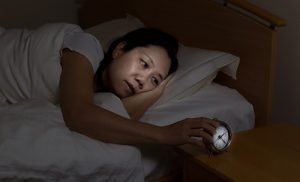 Going to bed each night, and especially the time at which we do so, is much more biologically determined than we realise, and is not always a simple matter of conscious choice.

For humans, the constraints of family, work and social obligations are factors that certainly play a large role in the bedtime choices we make. However, the time at which we begin to feel tired or sleepy each night is partly driven part by physiological and neurochemical mechanisms under the control of a master internal body clock, located in the brain.

Biological clocks are responsible for regulating the timing of many biological processes within our body. Most of these processes follow a circadian rhythm, meaning they cycle approximately every 24 hours. For example, the hormone melatonin is released at more or less the same time each night, signaling to the brain that it is night time.  This is followed by sleep, approximately 2-3 hours later.

However, the time of melatonin release varies widely between people.  This is often identified through differences in bed and wake times. The release of melatonin (along with some other biological processes) is closely associated with a person’s predisposed preference for earlier or later bedtimes. This is referred to as ‘chronotype’ and describes a person’s timing of sleep behaviour.

Most people are able to adapt their lifestyle to their sleep preference. Although a night owl may not appreciate being woken early to see the sunrise like a lark might, they can still function with little interference to their everyday lives.

For some, however, there is a point at which their extreme sleep timing becomes pathological. This means they are no longer able to adequately function in a number of aspects of their lives as a result of their biologically driven predisposition for very early or very late bed and wake times.

Most commonly this occurs in those with a preference for late timing. In our society, it is considered more socially acceptable to arise and retire early, as it interferes less with work and family obligations. 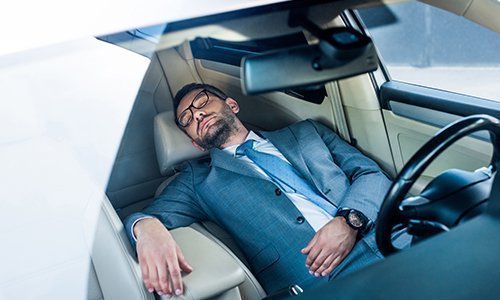 Those with much later timing are more likely to have problems with tardiness: it is easy to sleep through a 7 am alarm for work when you don’t go to bed until 3 am. Similarly, there is a ghoul-like stigma attached to staying up to the early hours of the morning when everyone else is sleeping. Indeed, for many who suffer the difficulties of extremely late sleep timing, they are viewed simply as lazy, unmotivated and undisciplined. What is commonly misunderstood, however, is that their preference for going to bed at 3 am is biologically, not necessarily consciously, determined.

This misalignment between the biological and social determination of sleep and wake times is what is now recognised with a clinical diagnosis of Delayed Sleep-Wake Phase Disorder.

A diagnosis of Delayed Sleep-Wake Phase Disorder (DSWPD) needs to involve distress or disruption to the individual’s daily life. This is often characterised by altered sleep-wake patterns that are not in-sync with your natural circadian rhythm i.e. very late sleep and wake patterns, late melatonin onset and an associated impairment (e.g. daytime sleepiness) that have lasted for at least 3 months.

For those who have school or work, they often struggle to rise at a socially acceptable time to meet their obligations and are left feeling tired and groggy throughout the day. Under these conditions, where work or other obligations must be prioritised, it can feel like being perpetually jet-lagged. If they are able to sleep at their preferred times, however, they can achieve an adequate amount of sleep that is refreshing and restorative. In fact, although many late chronotypes may pass some of the criteria for DSWPD, many do not seek a diagnosis if they can adjust their lifestyle to sleep at their preferred times so there is little negative impact on their life.

DSWPD is thought to occur because of a mismatch between the body clock’s timing of physiological and neurochemical processes (like melatonin production), and the desired sleep and wake times.

Melatonin release almost always occurs before the onset of sleep. This is true even in those with DSWPD, except that for them, melatonin release occurs at midnight or later, meaning sleep is unlikely to occur before 2 am. Therefore, when they attempt to go to sleep at 10 pm in preparation for an early start, falling asleep is incredibly difficult because the body clock is still signaling wakefulness.

While many of us will suffer temporary states of misalignment, such as jet-lag, we are generally able to adjust our body clocks to realign with an appropriate sleep-wake schedule. However, for reasons not yet fully understood, many with DSWPD find it very difficult to shift the timing of their body clock to realign with a more acceptable sleep-wake schedule and find themselves in a perpetual state of misalignment, hence why they seek a clinical diagnosis.

There are several different treatment strategies available for managing DSWPD, although the options vary in success rates and each has advantages and disadvantages.

In clinical practice, DSWPD is commonly treated via a combination of different approaches, aimed at both realigning the body clock, as well as correcting patient behaviours that may help with alignment. Different treatments include phototherapy (adjusting the schedule and amount of light at certain times of day, as light is a major synchronizer of the clock), delaying the timing of sleep by three hours per day until the desired bedtime is reached, cognitive behavioural therapy and pharmacological interventions.

It is now recognised that one of the most effective ways to shift the body clock to an earlier time is the administration of melatonin. As a pharmacological intervention, melatonin is primarily used as a synchronizing agent to “reset” the clock to align with the desired sleep-wake schedule. In addition to its resetting properties, melatonin also provides a soporific effect by promoting sleepiness, like some commonly prescribed sleep medications such as benzodiazepines.

Since melatonin is a naturally produced hormone, melatonin treatment is often preferable to sleep medications because of its likelihood to induce a shift in the clock, as well as having fewer and milder side effects or long-term detrimental outcomes, such as addiction.

A number of research studies have confirmed that melatonin is effective for the treatment of DSWPD (Auger et al, 2015; Auld et al, 2016), although there is still some debate as to the required dose and the timing of administration, to achieve the optimal effect. Recently researchers have shown that a dose as small as 0.5mg one hour before desired bedtime (i.e. a preferred earlier bedtime than usual) can reduce the time taken to fall asleep when bedtime is shifted to a much earlier time (Sletten et al, 2018). It is thought to be the combination of the clock-synchronizing and sleep-inducing properties of the melatonin, as well as the prescribed behavioural change associated with going to bed earlier, that improves sleep timing. This improvement in sleep timing was also associated with improvements to daytime function as well (Sletten et al, 2018).

What do I do if I suspect I have DSWPD?

Making improvements to your sleep hygiene is a good first step in helping improve your sleep problems. A list of good sleep practices can be found on the Sleep Health Foundation webpage (http://www.sleephealthfoundation.org.au/good-sleep-habits.html).

Many ‘night owls’ may pass some of the criteria for DSWPD but not seek a diagnosis if there is not a detrimental impact on their life. However, recent research has shown that shifting the body clock of night owls earlier using simple lifestyle interventions can improve mental health and performance (Facer-Childs et al, 2019).

If you continue to experience difficulties, it is also recommended that you visit your doctor/General Practitioner (GP) and request a referral to a certified sleep specialist or sleep clinic specialising in circadian rhythm sleep disorders (Monash University Healthy Sleep Clinic – http://www.monash.edu/medicine/base/about/clinics/healthy-sleep-clinic). Your GP may be able to prescribe melatonin, however, a sleep specialist will be able to provide a more comprehensive assessment of your sleep disturbance, which will better inform the treatment approach you should take and increase the likelihood of the treatment being effective for you.

Dr Jade Murray PhD is a postdoctoral researcher at the Turner Institute for Brain and Mental Health. She is an expert in the effects of circadian misalignment on overall healths, studying both healthy and sleep-disordered populations. Her research involves developing simplified methods for determining the timing of circadian phase and development of personalised management strategies for shift work and sleep to improve health and lifestyle outcomes for shift workers.

Professor Shantha W. Rajaratnam is the Deputy Director of the Turner Institute for Brain and Mental Health and Director of Industry Engagement at Monash University. He is an international leader in circadian rhythm disorders, their impact on health, and their treatment.

Dr Elise Facer-Childs PhD is a Translational Research Fellow in Industry at the Monash University Turner Institute for Brain and Mental Health. She is an expert in sleep, circadian rhythms and performance with a particular focus on individual differences. Previously based at the University of Birmingham UK, Elise has worked with elite athletes, clinical populations and the general public to help increase our understanding of how sleep and biological clocks impact the brain and subsequent performance.