Dr Catford completed training in 2016 as an Endocrinologist, which included a two-year fellowship in Andrology at Monash Health.  Andrology is the science that explores problems with the male reproductive system and Dr Catford specialises in male infertility. In 2016, Dr Catford embarked on a PhD project at the Hudson Institute of Medical Research . The project explored the reproductive and metabolic health of men who were conceived using a specialised type of assisted reproduction technology called ICSI.

ICSI – or Intracytoplasmic sperm injection – is where a single sperm cell is isolated and injected into a single egg cell to achieve fertilisation. This is quite different to typical in vitro fertilisation (IVF) procedures where thousands of sperm are exposed to an egg cell at one time. ICSI is often used when there is a low sperm count or poor sperm motility. Introduced in 1992, ICSI revolutionised assisted reproduction technology for those who experienced male infertility. While ICSI is a safe and effective treatment, questions remain unanswered around the implications of this treatment, especially on the offspring.  It is unknown if the infertility experienced by the father is subsequently inherited by male offspring produced via ICSI treatment.  Similarly, little is known about the future health implications of the offspring who are conceived using lower quality sperm.

Dr Catford explained that there are around 8000 genes involved in making sperm, and these genes are likely to be involved in lots of other processes in the body.  So, it is possible that other body systems may be impacted if one or a group of genes are not functioning correctly.  Additionally, it is also not known if and how the invasive nature of the technique which uses a microscopic needle to deliver the sperm cell impacts the offspring.  Dr Catford knew these questions could only be answered by rigorous research. Working under the supervision of World leader in male infertility, Professor Robert McLachlan, they undertook a study.  The goal of this study was to investigate the reproductive and metabolic health of male children born from infertile fathers comparing those outcomes with children born from fertile fathers. Importantly, the team wanted to carefully study those born using IVF and ICSI to see if there were differences between the methods of assisted reproductive technology.

The need for more research

In the largest study of its kind in the World. The team investigated a group of men aged 18-25 years and compared the data of those conceived with IVF, ICSI and those conceived without assisted reproductive technology. In data collected from 120 ICSI-conceived men and 356 naturally conceived men, the team found there was no evidence of poorer reproductive health in the ICSI-conceived men. The results of this work have been published in Fertility and Sterility in January 2022 and the team are working on a second publication of the results of the metabolic analysis.  In this regard, Dr Catford and colleagues have shown that ICSI-conceived young men exhibit higher blood pressure and higher indicators of insulin resistance compared to young men conceived naturally.  Interestingly there were no differences between those conceived using ICSI and IVF, suggesting that the ICSI procedure is not directly related to these outcomes. This research provides essential preliminary data for the continued exploration of longer-term impacts of assisted reproductive treatments on reproductive and cardiometabolic health.

How will this award help Dr Catford’s research?

Dr Catford was thrilled to win this award, and to have her dedication and research achievements recognised by her peers.  She also wants to continue to raise awareness of this important health area that she and her colleagues are continuing to study. Dr Sarah Catford is currently undertaking a post-doctoral research position at the Hudson Institute of Medical Research and working clinically in Andrology at the Royal Women’s Hospital in Melbourne and in General Endocrinology at The Alfred and Monash Health. Sarah is working on a new project in idiopathic male infertility (or male infertility of unknown cause) which   occurs in approximately 40% of infertile men.

Bronia Harding-Davis was awarded the ESA-Novartis Junior Scientist Award at the annual meeting of the Endocrine Society of Australia held in November 2021. This award recognises the best presentation at the meeting by an advanced trainee or a person enrolled in a higher degree.

Bronia completed a master’s degree in Biomedical and Health Science at Monash University in 2021. Her research was undertaken in the Appetite and Behavioural Control Group under the supervision of Dr Sarah Lockie and Dr Kelly Walton.  The team have been studying the complex problem of Cachexia. Cachexia is the loss of muscle with or without fat loss which occurs in chronic diseases, such as cancer. The commonly experienced weight loss, loss of appetite, weakness, and fatigue or cachexia is often treated by trying to manage the symptoms that result in the loss of appetite such as nausea. Sometimes it can be treated with hormones and corticosteroids. A better understanding of the mechanisms of cachexia in cancer is needed to be able to effectively treat this complex problem. 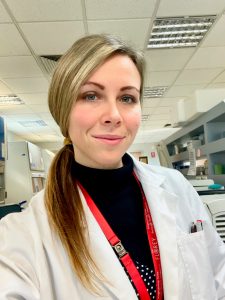 Before testing can occur in humans, pre-clinical studies are often carried out using models.  This is where researchers can understand how the problem occurs and safety can be established before studies move into clinical trials. The team at Monash had previously developed a pre-clinical mouse model of cancer cachexia.  Using this model, the team could introduce pancreatic cancer cells and explore the hormones that change in animals with and without the cancer cells. The animals for Bronia’s study were on the same diet and had ad-lib access to food and water. The mice and their food were weighed every day and the team found that loss of body weight and food intake started to occur around day 10. This models the cachexia in humans, which makes it an important model to understand the processes involved.

evidence has shown that a hormone known as Activin A is overexpressed in several cancers.  Levels of Activin A are linked to cancer survival, and this is thought to be through its impact on loss of skeletal muscle. Bronia’s project explored Activin A in the established cancer cachexia model. The team found that heathy, fasted mice treated with Activin A, ate significantly less than those who were not given the hormone. This suggested that Activin A may play a role in appetite suppression.  Following this, further experiments from the team have shown that in the presence of the hormone ghrelin which causes increased eating, exposure to Activin A resulted in reduced eating. The team’s experiments were able to show that that Activin A needed to be delivered directly into the brain to cause hunger suppression. Confirming a role of Activin A in appetite loss in a pre-clinical model is important preliminary data for further studies to explore the mechanisms of cancer cachexia in the hope for better management and treatment.

How will this award will help Bronia Harding-Davis’ research?

This award is an important recognition of the exciting work undertaken by an outstanding emerging scientist and will support Bronia in the next steps of contemplating a PhD program of research in the future. Bronia is currently working in Alzheimer’s research at The Florey Institute of Neuroscience and Mental Health.