Osteoporosis risk for men with obesity

Osteoporosis risk for men with obesity 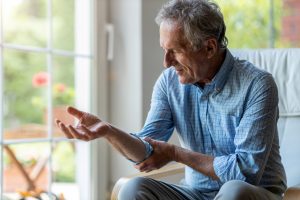 Osteoporosis is a silent disease where bones become weak and can break easily. It often goes undiagnosed because of the lack of obvious symptoms…. until a fracture occurs. To learn more about osteoporosis and how it is diagnosed visit the Hormones Australia osteoporosis page here. It is more common in women than men and increases in prevalence with age.  It is estimated that more than 22% of women and 6% of men over the age of 50 are likely to have osteoporosis.

Is obesity protective against osteoporosis?

Historically, obesity was thought to be protective against osteoporosis.  This was driven by research which showed a link between higher weight and fewer hip fractures in women. This protection against hip fracture was thought to be due to the increased padding around the pelvis and femur. However, obese women experience more fractures in other areas of their body. Around the same other data showed there were also improvements in bone mineral density.  These improvements were the result of a better understanding of the cause of osteoporosis and increased community awareness of the risks.

While less common in men, osteoporosis is still diagnosed in men.  The reduced frequency of osteoporosis in men is thought to be due to several factors. These include the larger male skeleton, the absence of a sudden drop in oestrogen during menopause and a slower rate of bone mass decline.  There are many factors that can also be linked to an increased risk of osteoporosis in men including medications, lifestyle factors, chronic diseases, and family history.

Early studies of osteoporosis focussed mostly on women and often only those over 50 years of age. So there has not been a lot of data examining osteoporosis in larger populations of men and women in the community. A recent publication in the Journal of Clinical Endocrinology and Metabolism has helped close this gap.  Their project examined the associations of body composition and bone mineral density in more than 10 000 adults under the age of 60 from the USA. 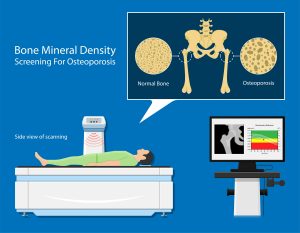 What is body composition?

Body composition measurements estimate the weight of our muscles, bones, and fat. It is measured by a simple test using a type of x-ray called dual energy x-ray absorptiometry (DEXA). It is a simple and non-invasive.

Lean mass is simply the weight of our bodies without the fat. Whereas fat mass is the weight of the fat in our bodies.  These can be expressed as an index called the lean mass index and the fat mass index which are corrected for a person’s height.  These measures are more helpful in understanding our body composition as they account for muscle and fat separately.  Most people are familiar with the body mass index or BMI. This is calculated using the weight of the person corrected for their height.  This can incorrectly identify people with larger amounts of muscle mass as overweight and obese.

What is bone mineral density?

The research from the large US study found that total bone mineral density was lowest in people without obesity. Both lean mass (muscles and bone) and fat mass increased with increasing BMI and was highest in those with a BMI of more than 40.

One of the major advancements of this data, is that the study was of a large group of diverse adults.  This means it is more likely to be representative of the general population.

When the researchers looked at men and women separately, they found something unexpected.  The figure below shows the data for bone mineral density (BMD) on the y axis on the left and the fat mass index or FMI on the x-axis across the bottom. Click here to see it in the research paper.

This shows that for both women and men that the bone mineral density decreases as the fat mass index increases. However, in men (in the dark line) the fat mass index had a stronger negative effect on bone density than in women. This means that as the amount of fat mass increases the bone density is reduced at a higher rate in men than women. Simply, more obese men may be at a greater risk for fractures than previously considered and screening might be an important part of preventing osteoporosis. 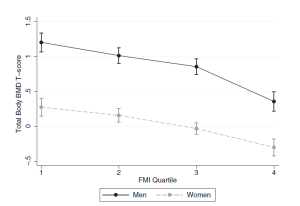